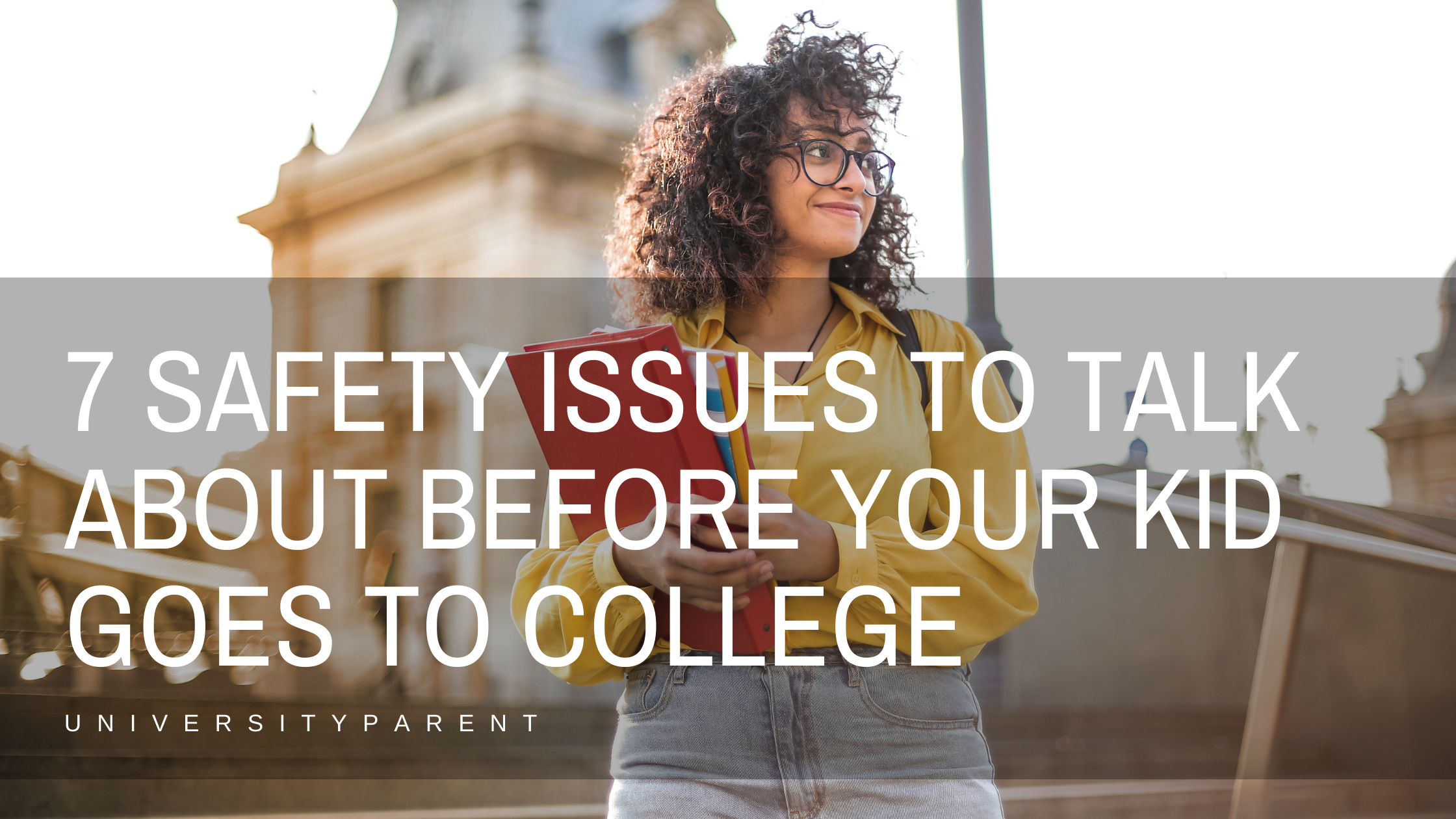 It’s been said being a parent means spending the rest of your life with your heart walking around outside your body. That especially rings true when your kids embark for college. They’re no longer under your roof and could be several states away.

You can’t go live in the dorm with them or rush in and save them like Batman whenever danger threatens. That said, you can teach them lessons about the most important safety issues found on campus, so they can go out into the world as prepared as possible.

Parents face a dilemma when it comes to talking with their children about safety. We want to give our children the information they need to stay safe, but we also want to shelter our kids from information that might frighten them.

In his landmark child safety book “Protecting the Gift,” Gavin de Becker points out most children are aware of danger and ready to understand it earlier than parents are ready to talk about it. In fact, they benefit from being part of the safety plan. This is especially true of teenagers.

The best thing you can do to prepare your child for safety issues they may face in college is to talk with them about them while they’re still at home. Even as they enter high school, you can begin laying the groundwork for college safety and security. These might not be the most comfortable or fun conversations you ever have, but they may be the most important.

1. The Real Deal About Drugs & Alcohol

According to data compiled by the National Institute on Alcohol Abuse and Alcoholism, about 1,825 college students in the U.S. die of alcohol poisoning and alcohol-related injuries every year. Because drugs are illegal, it’s difficult to get reliable numbers on drug abuse, but deaths happen every year across the country as well.

As parents, we can’t pretend our children won’t drink or experiment with drugs while at college. It’s part of the experience for most youth. We also can’t ignore this fact of college life or dismiss it as insignificant with a “kids will be kids” attitude. Neither of these approaches will help your child stay safe.

Instead, talk seriously, while actively listening to your kid’s questions, about the benefits and risks of using alcohol or drugs. Talk honestly about your own experience, and share what you’ve learned about how to avoid binge drinking, when to slow down or go home, and how to avoid the worst alcohol-related risky behavior drunk youth often find themselves involved in.

Campuses are relatively safe in most parts of the country, but they also have deserted, poorly lit paths students cross at odd hours. They’re magnets for pickpockets, thieves, and sometimes violent criminals, who view naive 18- to 24-year-olds with enough money to attend college as walking ATM machines.

Although self-defense training is never a bad idea, the best kind of training you can give your children is about being aware of themselves and their surroundings so they can spot potential problems and avoid them before they begin.

Talk with your teen about these four levels of awareness. If possible, spend time practicing each of them as you go into the world together shopping, to the movies, or in other public places. The more practice your child gets before they go away to school, the better they’ll be at it while they’re away.

Although most colleges take efforts to keep dormitory buildings secure, the truth is the front doors are largely porous. No matter what policies the administration puts in place, the power over who comes in and out rests in the hands of several dozen 18- and 19-year-olds. Safety and security for your children in their home on campus will begin and end with their rooms.

Simply reviewing the following dorm safety techniques, and checking up to see how well your child is following them, can help protect them from the human elements other students should not have let inside:

Finally, most college campuses forbid having weapons in the dorm room, but a last-ditch improvised protection option isn’t a bad idea. Some options for this include a baseball bat, hockey stick, or similar piece of sports equipment, a can of oven cleaner to use as mace, or an air horn to stun a burglar or attacker while making enough noise to wake and attract nearby dorm-mates.

College students are a rich target for scam artists of all stripes, from identity thieves to catfish to more traditional short-con schemes. These kinds of risks don’t physically threaten your child, but they can be expensive and embarrassing. Some of the best tips to avoid them include:

Finally, remind your children to use the “grandma test” to avoid online scams: “If something sounds too good to be true, it probably is.” That will help them avoid the most common lures for scams the bad guys aim at college kids.

5. Stalking (From Both Sides)

Stalking is a problem in college, and one your teens should be prepared to encounter. According to deBecker, though truly violent stalkers do exist on campus, most stalking situations develop over the course of months and can be stopped early with the right decisions.

From a victim standpoint, de Becker recommends one single piece of advice: “The best contact is no contact.” Once your daughter or son decides they don’t want to be romantically involved with somebody, they should stop answering any attempts to communicate. Giving in after a dozen phone calls just teaches a potential stalker that a dozen phone calls is the minimum “price of admission” for getting their target’s attention. By simply cutting off all communication, your child can prevent potential stalking from gaining the kind of momentum it needs to develop into a real problem.

Further, they should document any kind of problem that feels like stalking and inform campus authorities. That way, if the situation continues to escalate, you can help them point to the evidence and spur the people responsible for protecting your child into action.

It’s important to talk with your child about respecting boundaries. This can be challenging because the overwhelming majority of romantic movies have a theme where one of the lovebirds pursues the other despite being told no. While this makes a good story, it’s the opposite of what you want your child to do when told by another student “Thanks, but no thanks.”

Unfortunately, risks to your child on campus don’t only come from fellow students or criminals who prowl on campus. College security, police, teachers, and other authorities can also pose a threat to your child. Although such things are rare, they’re something you should prepare your child to deal with.

Each such situation is unique, but some of the best ways to minimize power abuse while at college include:

Beyond these specific tactics, help your child understand that in any situation where an authority figure is overstepping, it’s usually a mistake to lose your temper and become aggressive. Remind them to remain calm in the moment and deal with the situation from a safe distance and in the most effective way.

Bureau of Justice Statistics shows that 31% of college-age women report having experienced physical abuse by a romantic partner. Data on abused men is harder to find and underreported at epidemic levels, but it’s likely comparable.

College students are particularly vulnerable to partner abuse because most have not had an unsupervised relationship before, so they don’t know what’s normal and appropriate in a relationship. They don’t know abuse and grooming for abuse when they see it. Further, some 52% of college students report they don’t believe it’s appropriate for them to get involved if they suspect a friend is abusing or being abused.

The obvious starting point for this conversation is to remind your child that nobody has the right to physically hurt them for any reason, and to end immediately any relationship or friendship with somebody who thinks otherwise. Beyond that, teach them to be on the lookout for emotionally abusive behaviors and signs that a partner might be escalating toward physical abuse:

Most importantly, make sure your child feels comfortable and safe talking to you about their relationships, so they know they can come to you for advice if they start seeing signs that make them uncomfortable.

College leadership typically wants students to advocate for themselves. For instance, they don’t want parents complaining about a student’s grade or a project assignment. But if your child has advocated for themselves for a safety issue and it’s still not being addressed, then you need to step in. The leadership might listen to you and your concerns perhaps with a more careful ear than they will those of your child.

Keep watch on the news from your child’s campus and the surrounding city. Find out who to talk to about your concerns, and send emails or make calls as appropriate. Your child is responsible for navigating college life with the safety lessons you’ve helped to give them, but you can make that life a little more danger-free by holding college staff accountable for the jobs they get paid to do.

Nicholas Malone is a freelance writer and lives with his family of six in Northern Michigan. He remembers his own college days fondly. But now, he’s got a different perspective as his oldest daughter will be a senior in high school this fall and they’ve already begun looking into colleges.

How to talk about drinking and drugs