6 Ways for Transfer Students To Make a Smooth Transition 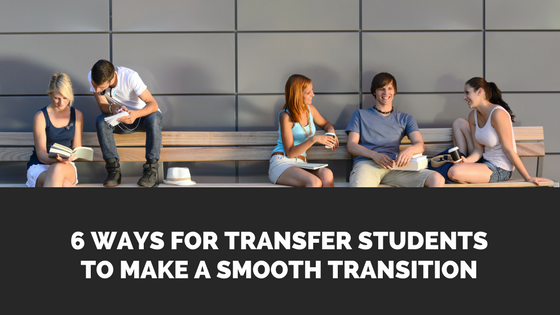 Conventional wisdom tells us that we send our children to college so that they can make more money. But the truth is much deeper and complex: we want their lives to be better than ours. We want them to be happy, financially comfortable, intellectually fulfilled, and ethically grounded. Finishing college brings these dreams closer to reality for our children.

There are many ways to attain a bachelor’s degree, and costs in terms of both money and time can vary significantly. Transferring from a two-year to a four-year college is a viable approach, especially in the sciences, as the prestige of the institution plays a much smaller role in the ultimate earning potential compared to other fields. Degrees in the STEM (Science, Technology, Engineering and Mathematics) fields pay the highest starting salaries on average, and the salary advantage increases over time. Thus, the cost of attaining a four-year degree in the sciences is balanced by the financial benefits of succeeding in that quest.

Choosing where to transfer after the two-year college is based on many variables. A few of these include cost, selectivity, name recognition, proximity, sports, extracurricular activities, majors, class sizes, and tutoring and other support services.

We received funding from the National Science Foundation Scholarships in Science, Technology, Engineering, and Mathematics (NSF S-STEM) program, which is intended to improve and increase the US workforce in STEM fields. Our primary goal was to ensure that science transfers entering our institution would graduate and pursue careers in science. As faculty with twenty years of teaching experience in the sciences at a small liberal arts college, we have worked closely with many transfer students. In the process, we have observed some pathways for success as well as roadblocks to a smooth and efficient transition.

6 Ways for Transfer Students To Make a Smooth Transition

1. All courses are not equally useful for degree completion.

Of the courses transferred from the two-year college, most will address general requirements or will serve as electives. Thus, it may take more than two additional years to complete a bachelor’s degree. Courses in many science majors have prerequisites, which require advanced planning of specific, multi-semester sequences (e.g., General Chemistry I, then General Chemistry II, then Organic Chemistry I, etc.). Unaware of these complexities, many transfer students have unrealistic expectations regarding their graduation date.

2. Courses that count for the intended major are best.

Choosing courses in the first two years of study can be most effective if the student has matched a major to the desired career and has identified bachelor’s degree requirements at one or a few “goal” institutions. Taking as many of the right mathematics, physics, and chemistry courses as possible at the two-year institution can move a science major forward in completing the four-year degree. The life sciences, including biology, biochemistry, pre-med, and pre-vet programs, typically require at least two semesters of physics and four semesters of chemistry in addition to math. Other science majors, such as engineering, computer science, mathematics, and physics, require math courses beyond Calculus I and II. The introductory courses for these majors are fairly standard and can often be taken at the two-year institution.

3. Math preparation is key to any science major.

Although most science majors require a two-semester calculus sequence, many students who lack confidence in their math skills will avoid math courses. This is exactly the wrong approach. Students should start at the appropriate level immediately and work their way as far up the math sequence as possible during the first two years (e.g., College Algebra, Pre-calculus, Calculus I). Some four-year institutions start at the pre-calculus level and do not offer remedial math courses.

4. Be realistic about the first semester at the four-year institution.

It is more important to be successful in the first semester, than to take an unnecessarily ambitious course load, and to perform poorly. When students arrive at a new college as juniors, their preparation and progress may be very different than their peers who have been at the four-year institution from the start. Transfer shock is a well-documented phenomenon for students transitioning to new institutions with different academic and social environments.

5. Two years after the two-year institution may not be enough for a science degree.

Factor in the need for an additional semester of study at the goal institution, or summer courses to fulfill degree requirements, in the necessary order. Students should avoid overloading themselves with a difficult course schedule. Pacing for success is more important than sprinting to the finish. This is especially true if a student is transferring to change from a non-science field to a major in the sciences.

6. All courses may not transfer.

The Registrar’s Office at the four-year institution can clarify any exclusions for transfer coursework. Often remedial courses such as intermediate algebra or reading, and non-academic courses such as physical education or certifications like CPR or SCUBA, do not transfer.

Most four-year institutions allow no more than half of the courses required for the degree to be transferred in and will not accept courses with grades lower than a C-. Students get a fresh start because only the courses transfer in, not the grades.

Every student is different, and ultimately every choice is going to depend on individual circumstances. To obtain a bachelor’s degree, the ideal approach is to attend the preferred school for four years. Each institution has a four-year plan for students, starting with freshman orientation, proceeding through a deliberate sequence of courses in the major, and culminating with a senior capstone experience. It can be less satisfying for transfer students to jump into the middle of this sequence. However, it is feasible for them to complete a four-year degree in a timely fashion through advanced planning, wise course selection, and choosing a four-year institution that is a good fit for the student’s goals and personal circumstances. For some, starting at a two-year college is the best path to success.

Kelly R. Debure and Laura Reiser Wetzel have been professors for over 20 years at Eckerd College, a small liberal arts college in St. Petersburg, Florida. This contribution to UniversityParent was inspired by experiences gained through a grant from the National Science Foundation to provide scholarships for science transfer students (No. DUE-1154520).

Dr. Wetzel, Professor of Marine Science, enjoys teaching a wide range of geology courses on topics ranging from rocks and minerals to volcanoes and earthquakes.

Dr. Debure, Professor of Computer Science, specializes in image processing and graphical user interface design. Their experiences mentoring college students and raising daughters have provided them with valuable insights as both teachers and parents.